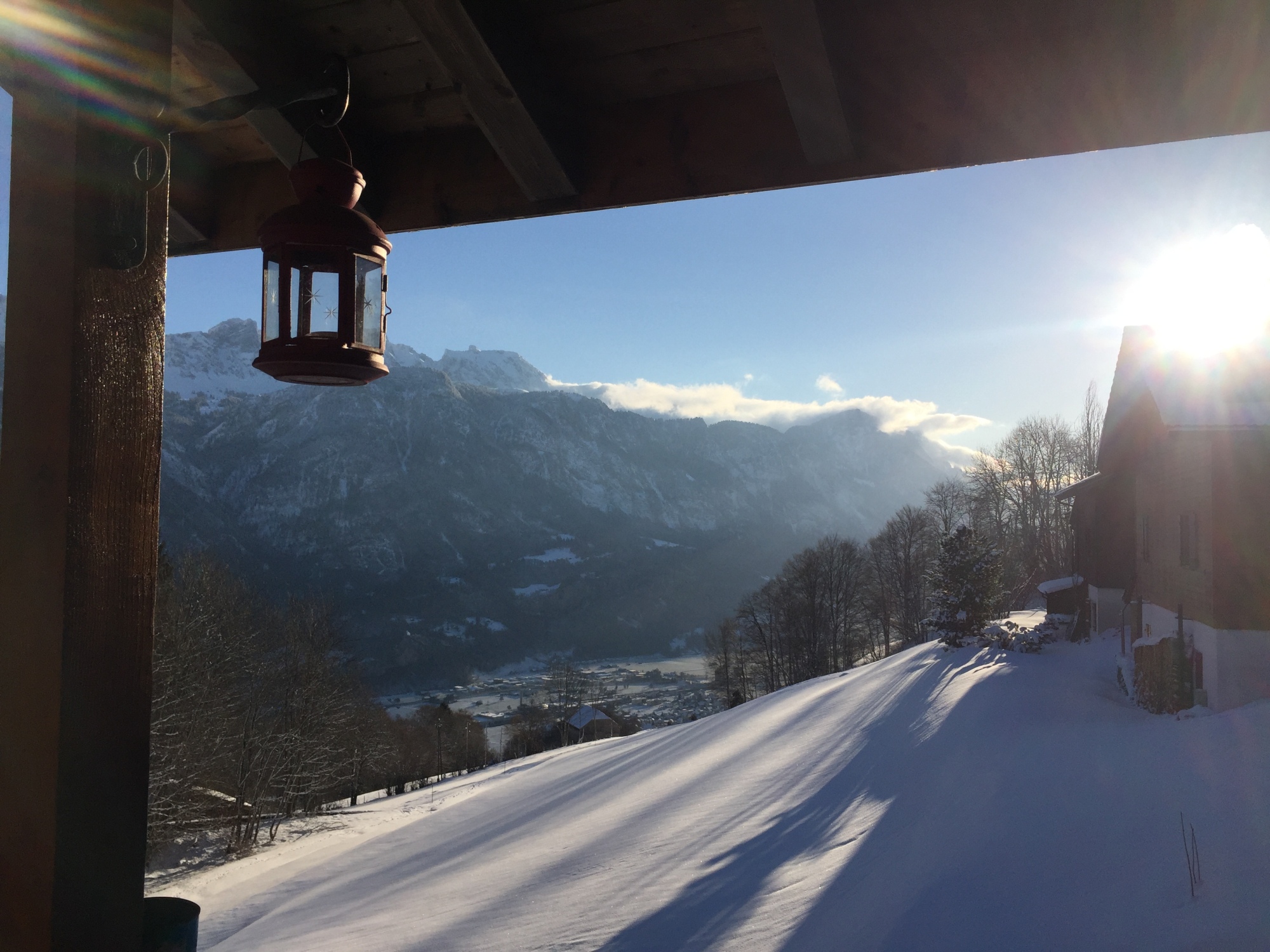 With a bit of pre-planning from my amazing girlfriends amazing mum, this week we were lucky enough to have 4 days in the Swiss mountains, snowboarding.

We set off on this family holiday en-masse (6 adults, 2 children) from Luton airport and, after a short drive from Zurich, arrived in Flumserberg as the sky got dark and the snow started to fall. 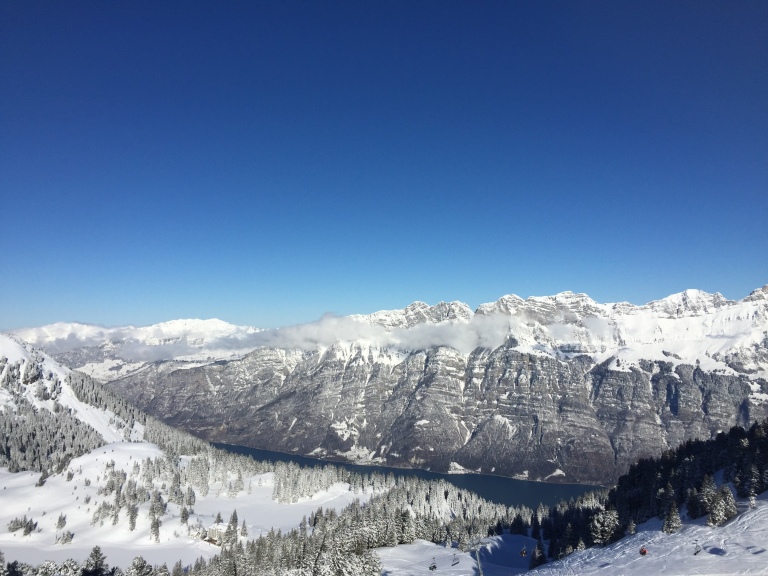 The next morning we jumped out of bed at 0630 and chucked down a quick breakfast before heading for the rental shop to pick up snowboards etc. Then, through gritted teeth and holding back tears, we all coughed up the money for a 4 day ski pass and set off to the chair lifts from Tanenboden.

Luckily for me, my brother is into snow boarding and he lent me all of his kit, which saved me from going bankrupt – the pink, I find, is particularly fetching… 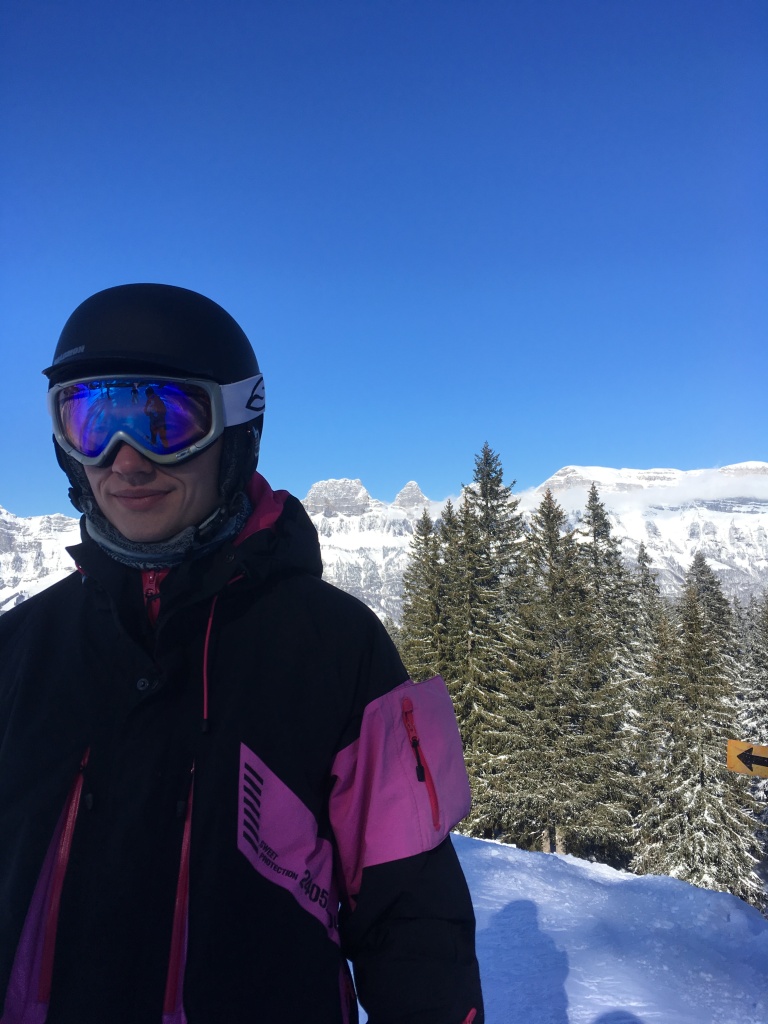 At the top, I realised that I had an urgent need to go fast, really fast, and to push myself hard physically. One of the benefits of not drinking is that I feel a lot fitter and more capable of hard exercise. So instead of heading down the gentle slope of the first blue run, I launched myself off the side of it and set the tone for the rest of the trip.

Day one passed in a blur, with no injuries! Back at the chalet (Valdonga, Bergheim – really cosy, only 1 bathroom though!) we discovered that some great sledging was to be had on the hill beside our lodge – my girlfriends 4 year old niece was incredibly keen on sledging and I won’t forget the sight of her flying away from us down the hill after our three person ‘sledge train’ crashed. Her tiny legs and arms flailed around before she disappeared – the last thing anyone saw as she tumbled out of sight was her massive smile… Then she reappeared looking like a Yeti and, of course, shouted ‘AGAIN!!!’.

Naturally, as adults, we got the honour of being her chairlift… 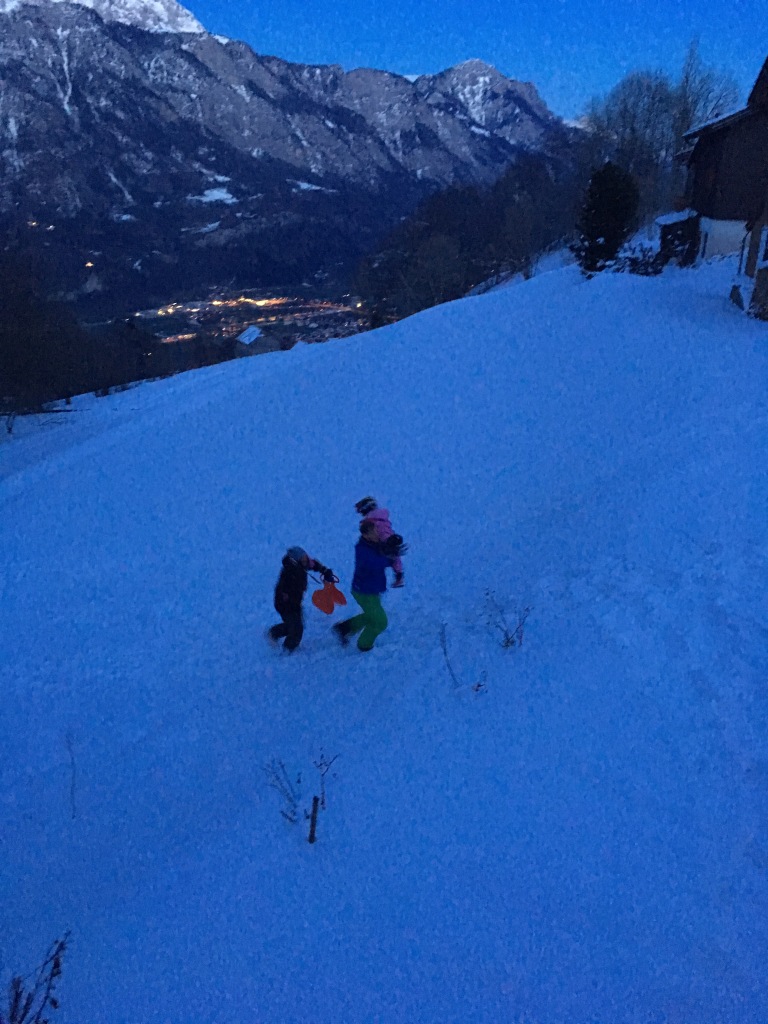 On day two, we allowed ourselves a 7am alarm and arrived at the pistes a little later. We wasted no time in heading up the slopes because this day was as close to perfect as we could hope to get! The sky was clear, the visibility great, and we all pushed ourselves a little harder – I even got cocky and went for a couple of jumps…

Day three came with another 6.30AM morning. The visibility was good and there were less people around – this time we headed off piste, through some beautiful woodland – and I finally nailed an ok jump.

I would have loved to have captured some video footage on my GoPro, but my dog ate the memory card before the trip… Luckily there was a skilled Iphone operator to hand for one of the few jumps I did land… 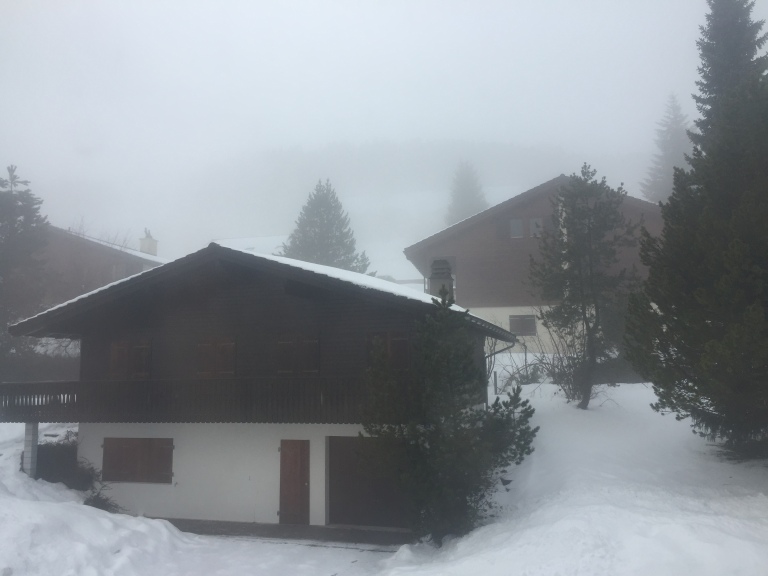 On the last day, we woke up to some Icy snow and poor visibility – we gave it our best shot but the conditions deteriorated over the day and in the afternoon the snow turned to rain. At this point we discovered that water makes you stick to snow and we started to fall over, a lot! We threw in the towel mid-afternoon and headed back down to our chalet where, obviously, sledging!

This was a treat of a break in the mountains, Switzerland is a bit bizarrely priced though – I got the impression that they make it up as they go. Eg:

Finally, my favourite piece of information that I found on the area we stayed in is from Wikipedia:

“Flumserberg is a resort area in the Swiss Alps, located in the canton of St. Gallen. It is composed of several villages between 1,160 and 1,344 metres. The resort sits on a terrace overlooking the Walensee, above Flums in the Sarganserland region. Flumserberg mainly belongs to the municipality of Flums”

‘Municipality of Flums‘ sounds like an apt description of Luton airport, where this trip ended; on a slow purple bus to the train station – that no-one could be bothered to connect with the actual airport.